The new, 3 million SF Walmart import distribution complex in Ridgeville, SC is the 8th largest building of its kind in the world. The 14-month schedule was exceedingly aggressive, yet quality and safety were never compromised. Tilt wall placement was critical to success and required careful coordination. Indeed, everything about the project was massive. Project stakeholders were passionate, involved and keenly interested. The South Carolina Ports Authority (SCPA), South Carolina Department of Commerce, Dorchester County, International Container Shipping industry, International Longshoreman's Association and many other key players in the global logistics market had spent more than four years working together to secure Walmart's commitment as the anchor tenant in their new Ridgeville Commerce Park outside of Charleston. The project delivery method was Construction Manager at Risk (CM@R) and included a highly collaborative preconstruction phase to provide budgeting, value engineering, cost analysis, schedule evaluation, and constructability reviews to Walmart prior to commencement of construction. Now complete, the prime location will supply several regional distribution centers, supporting approximately 850 Walmart stores and Sam's Clubs across South Carolina and beyond. The 230-acre site required substantial tree clearing and sitework prior to construction of the facility that included a distribution warehouse building, a cross-dock building, fire pump house, guardhouse, and an asphalt employee parking lot for 1,400 vehicles. The truck court parking portion of the project is one of the largest single Roller-Compacted Concrete (RCC) projects ever completed. At 80 acres and 10" thick, the 120,000 CY of RCC accommodates 2,400 semi-trailers waiting to load and unload. The 2,770,000 SF distribution warehouse building is a conventional steel-framed structure with corrugated metal deck, insulation, and single-ply membrane roofing. The perimeter walls were constructed of 370 tilt wall panels and 36 interlocking MFL (maximum foreseeable loss) "fire wall" panels. The building is equivalent to 52 football fields under-roof, and it is three quarters of a mile long. The 261,000 SF cross-dock building is also a conventional steel framed structure with corrugated metal deck, insulation, and single-ply membrane roofing. The perimeter walls are comprised of 153 8" panels. The impressive tilt wall scope was completed in just 10 weeks. Each building has 225 loading docks with associated roll up doors, 40,000 lbs levelers, alarms, fans, and lights. The project included 6 miles of sanitary sewer, storm sewer, domestic water, and fire water piping. It also included 3 miles of electrical, natural gas, fiber optic, and hydrogen lines. Soil stabilization efforts were critical to project success because the disturbed portion of the site was surrounded by wetlands. In response to this, the project team included a full-time erosion control manager who had oversight of the project-specific Stormwater Pollution Prevention Plan implementation and monitoring to ensure the massive project had no impact on the existing wetlands. The $200M, 3M SF import distribution center will provide high-quality jobs for 1,300 employees and is expected to boost SC port volumes by 5% now that it is fully operational.

Caddell overcame significant challenges to complete this massive project in just 14 months, all while the global COVID pandemic continued to wreak havoc with material and manpower availability throughout 2021 and into early 2022. Caddell interviewed all major subcontractors prior to selection to ensure each had a feasible plan to meet the project's critical schedule milestones. The earthwork subcontractor worked around the clock and acquired a permit to burn stumps and scrub instead of chipping or hauling off-site. This required light towers and a 24/7 fire watch to clear the entire 230-acre site in just three months. Caddell and the steel supplier expedited shop drawing review and approval so all of the steel could be purchased in December 2020 prior to a substantial price increase going into effect and to expedite delivery to the site. The design of the cross-dock building incorporated unique, continuous structural steel embeds in the tilt panels. This feature necessitated shifting pick points and precise coordination with the lifting engineer, crane operators and tilt panel erectors to avoid rigging conflicts. The planning paid off, and the structure was completed in just 30 days. The project included enormous spread footings, and often, the concrete for foundations, slab, and tilt panels was being placed all in the same day. Caddell's single-day placement record was 1,600 CY. The project included 523 tilt wall panels and completed in 10 weeks. The single-day record was 52 panels erected in 12 hours.

The perimeter walls of the distribution warehouse were constructed of 370 tilt wall panels of varying thicknesses ranging from 9.25" to 11" thick. 36 interlocking MFL (maximum foreseeable loss) "fire wall" panels were also included. Each of these panels had to be meticulously coordinated and precisely formed to meet the required lap joint design. In total, the panels on this building contained 13,500 CY of concrete, 1,300 tons of rebar, and over 8,000 lifting, bracing, and structural steel embeds. Caddell utilized a two-slab, Ductilcrete "Heidebed" system consisting of a 3" base slab from which the tilt panels were cast and erected. Once erected, the final 5" topping slab was placed. This eliminated the need for an exterior perimeter waste slab; which saved both time and money. The perimeter walls of the cross-dock building were comprised of 153 each, 8" thick tilt wall panels cast on a perimeter casting slab totaling approximately 3,300 CY. Each panel required the use of helical ground anchors to brace directly to the building subbase to avoid drilling into the finished concrete slab. Each of the 306 anchors were precisely pre-drilled so, once erected, the panel brace could quickly and easily attach to the anchor. The tilt wall scope was performed by Lithko, using SureBuilt lifting and bracing hardware and Spec Chem concrete cure, bond breaker, and sealer.

This project's effect on the local community cannot be overstated. With 1,300+ new, high-quality jobs created, the impact on the area's economic development will be felt for generations. According to Walmart, each of these new positions "brings with it a pathway of lifelong career opportunity." The old adage "all boats rise" has proven literally true as the new import distribution center will increase volumes at the deep-water Port of Charleston by 5%—multiplying the economic effect even beyond the physical project location. Walmart is known for significant contributions to local communities surrounding their business interests, and this import center is no different. At their recent Grand Opening event, they presented a $10,000 check to a local nonprofit organization whose mission is to bring joy to needy children through the gift of bicycles. The positive impact to the community was felt in small ways even before the project was complete. Caddell's onsite construction team, for example, took personal time from their weekend to remove almost 100 bags of litter that was scattered along a main highway near the project site. Community service was in the heart of the staff from day one, as it is part of the company's creed, known as "The Caddell Way." Environmental contributions were made, as well. Caddell worked with the U.S. Army Corps of Engineers to protect nearby wetlands before, during, and after construction. In addition to protecting the wetlands, great care was taken to proactively bolster their health by planting indigenous flora that thrives there. 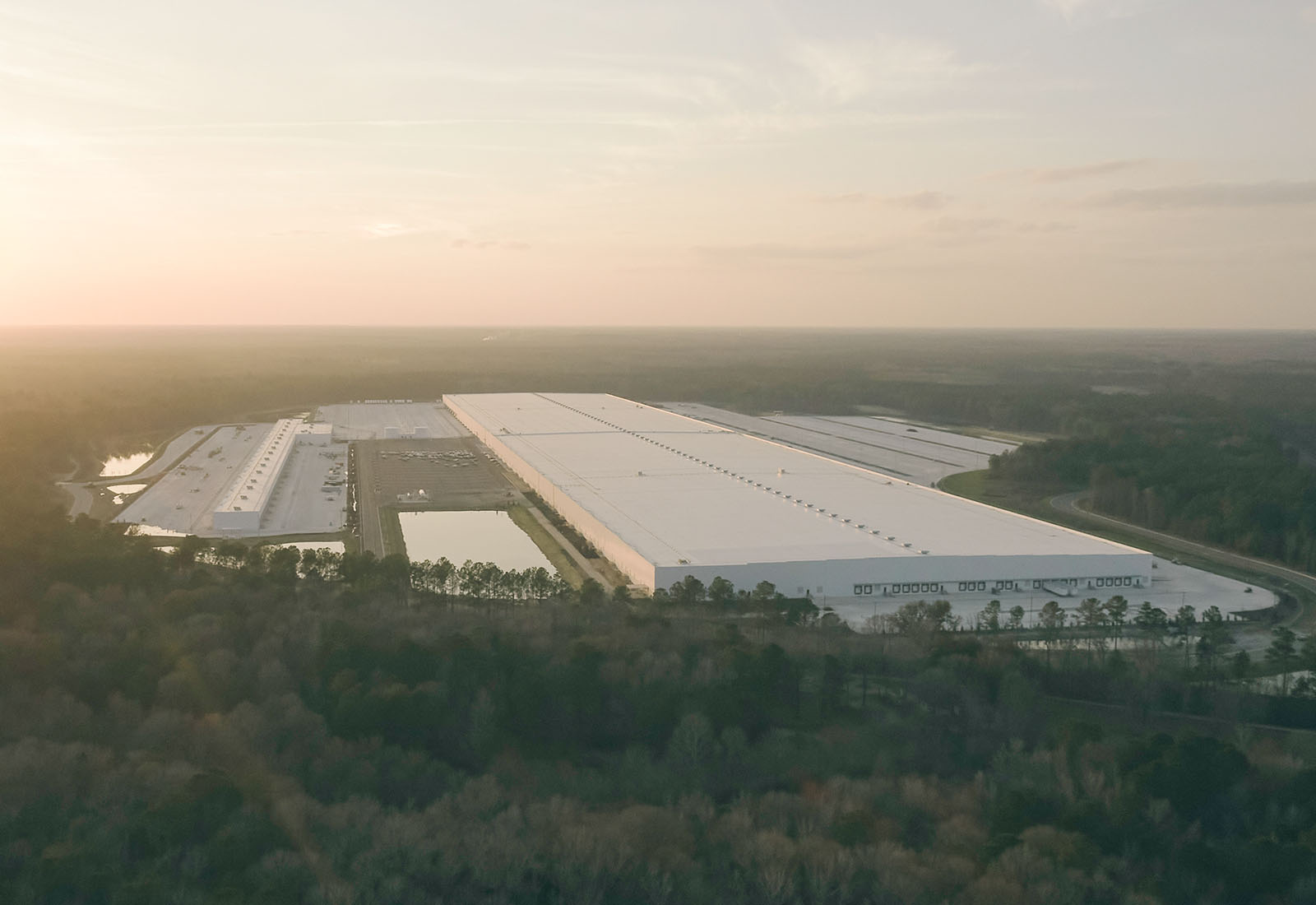