The Blockyard Industrial Complex is an upscale, 66,000 square foot office and flex warehouse space located in South Salt Lake, Utah. The Interior of the building provides office and showroom space for the expanded offices of the building owner and lease space for future tenants. It was designed to be a historical reference to the Buehner Brick and Block Plant that was originally on the site of the industrial complex. The Buehner Brick and Block factory was a landmark in the community for decades. Because of this, the intent of the design of the Blockyard Industrial Complex was to preserve the feel of an early 20th century factory and provide a modern flex warehouse space for the rapidly changing South Salt Lake area. Originally, the design of the building used all brick walls. However, this was costly and not very durable. Through much coordination and planning between the architect and Hughes General Contractors, a new design was created that was highly durable, much more affordable, and had a better building envelop by using tilt-up. To highlight its durability, the new building survived a 5.7 magnitude earthquake during construction with no damage. The building is built on a zero lot line site with the building being as close as 12” from the adjacent properties and the UTA TRAX line corridor. This area also has poor soil conditions, forcing the building to be built on top of a system of Geo-piers to support the weight of the concrete structure. The building is built using concrete tilt up construction with many panels receiving an inlayed tumbled brick veneer to replicate a brick façade of a much older building. Each of the door frames, window frames and the steel signage frames above each entry are made of plate steel with faux rivet heads to mimic steel plate and rivet bridge construction from turn of the last century. At the entrance to the site of the building, there is a steel archway built of the same plate and rivet construction using hammered metal panels and brick column bases to match the building. The floor of the building was constructed using the patented MagicSlab technology to provide a warehouse floor with virtually no cracking and 35’ spacing on control joints. This allowed the exposed tilt-up panels to be cast over unblemished casting beds, resulting in no telegraphing of sawcut joints or cracks onto the surface of the tilt panels. The lack of control joints provides a nearly continuous working surface for the warehouse areas. As a final salute to the Buehner block factory we replicated the original concrete sign that was on the old factory office building and placed it in the site where it can be a constant reminder of the history of the area. The sign was constructed of a colored and sandblasted concrete tilt up panel to look like it was an original piece. 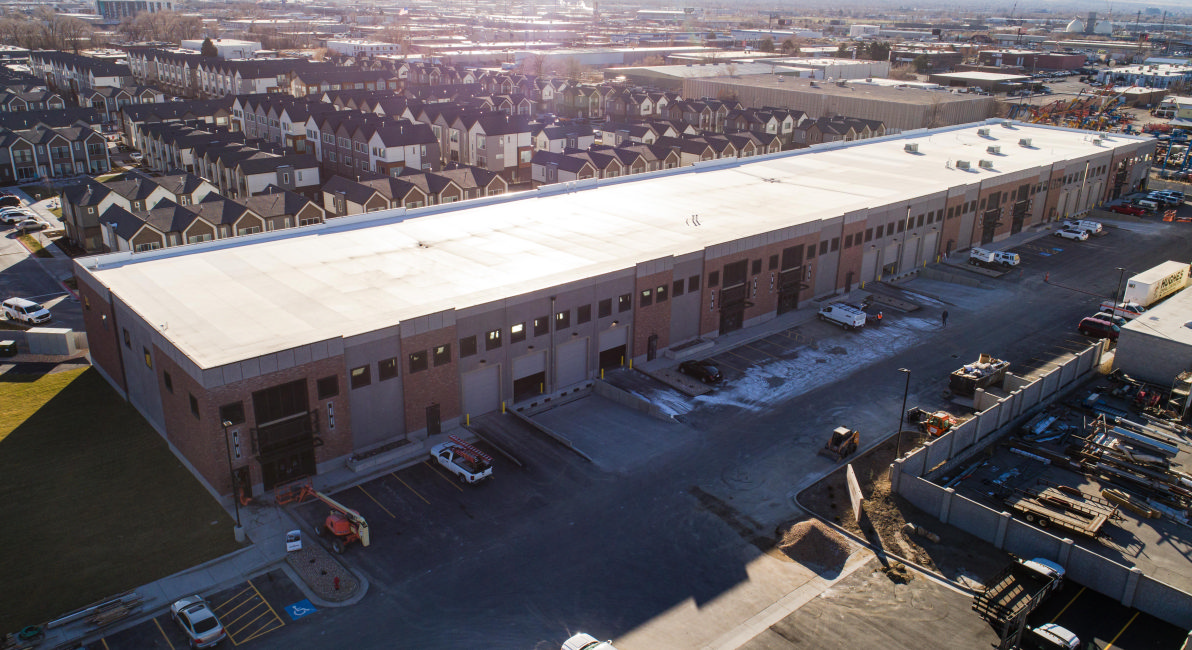