The City of San Pablo, California had a unique brief: create a modern City Hall that still reflected the Spanish Mission history of the area. The city’s officials had toured other modern civic buildings and chose tilt-up concrete construction for its durability, cost advantages and speed. During the creative process, RMW refined the curves and profiles of the tilt-up panels and developed a palette of earthy colors that allude to the Spanish Mission style of the previous town hall. The panels were designed with reveals, particularly at openings to add depth and interest, while balanced restraint with details elsewhere helped to achieve a modern façade. RMW studied the massing and used repeating panels to simplify the formwork on the sides and back of the building. These simplified panels on the rest of the building are contrasted with the tall panels that form the tower on the northwest corner, marking the vehicular gateway, as well as the striking curved panel at the main building entry. The design-build delivery method with Overraa Construction, and the fact that they self-performed all of the formwork for the panels, yielded efficiencies for both the budget and schedule. One challenge during construction was that the concrete panel tilt operation was in direct line of concern to the neighboring health center. If a panel were to fall, it would fall onto the health center’s property. For the panel tilt, Overaa provided traffic control plans weeks ahead of time so that both the City of San Pablo and West County could review, provide comments, and make changes as necessary. Further complicating matters was that two sides of the building were inaccessible by the crane. Overaa’s solution was to leave out part of the slab on grade so that the crane could drive down the middle of the slab and place the panels. The slab that was initially left out was poured once the rest of the panels were lifted in place. The coordination and panel tilt went off without a hitch. From a structural engineering perspective, Buehler had to consider that the building is located adjacent to the Hayward fault. The concrete panels provided a unique combination of ductility and stiffness to resolve imparted lateral seismic loads. With the amount of fenestration openings, the wall panels provided an innovative and streamlined approach to the lateral system. Utilizing the strength of the piers on each side of the windows, lateral resistance was achieved without the need of braced frames that would have blocked views through the windows. The result of this collaboration between RMW, Overaa and Buehler is a rarely seen civic building constructed in tilt-up, one that is contemporary and inviting while maintaining the desired visual connection to the town’s heritage. 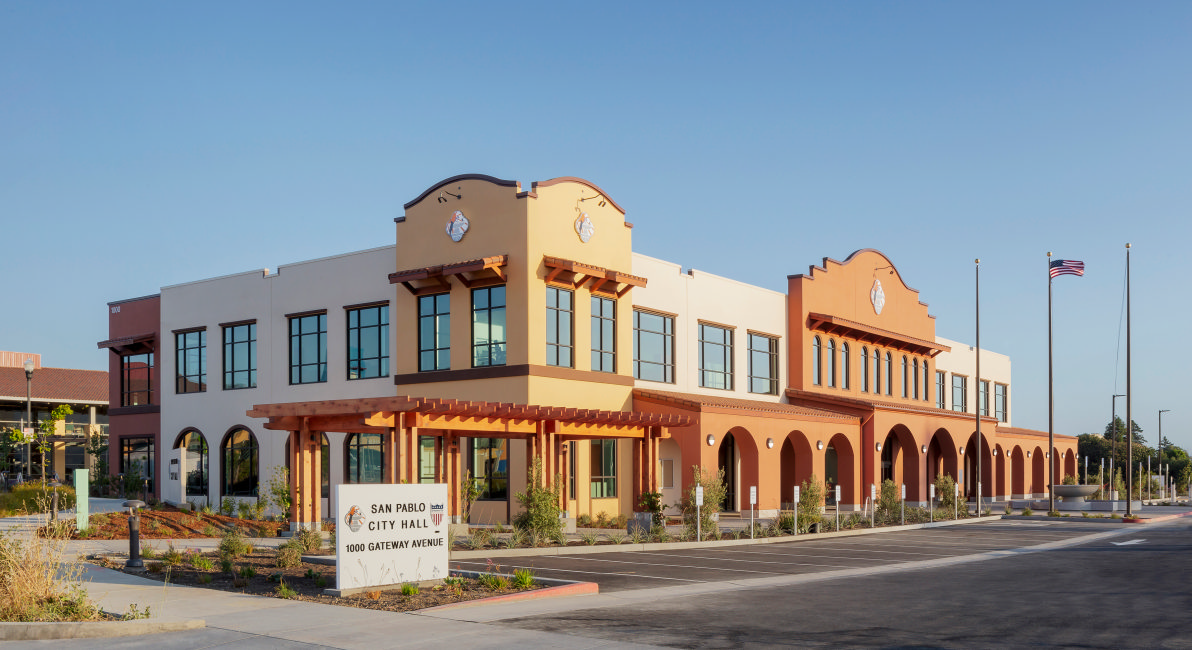