Baptist Health’s new premier medical complex in Broward County offers a patient-centric, contemporary design. This 112,000 Sq. Ft. Facility further accentuates Baptist Health longstanding focus on wellness as an integral part of one’s overall healthcare, providing everything under one roof. The project is a four-story medical office building utilizing the tilt-up construction method for the perimeter walls of the building plus walls of the mechanical enclosure, screen walls and emergency entrance canopy, as well as a tilt-up screen wall on the roof to conceal equipment. Due to its location in a high-velocity hurricane zone, the tilt-up panels were designed to meeting the pressures associated with a 180-mph ultimate wind speed sustained in a 3-second gust. The elevated floors and roof were constructed with a cast-in-place concrete flat slab, requiring concrete haunches to be incorporated into the tilt-up panels. Additional panel reinforcement – either bent bars or dowel bar splicer inserts – was detailed to extend into the cast-in-place concrete slab. The stability of the structure relies on the tilt-up panels only as shear walls; no supplementary bracing schemes were incorporated into the design. Architecturally, the design included several features cast into the tilt-up panels to increase the overall appeal of the office building. Custom form liners were purchased so that the pineapple logo associated with Baptist Health could be cast into the tilt-up panels on two prominent sides of the facility. The overall dimensions of the pineapple logo are 25’-5” wide by 35’-4” tall, tip to tip, with a recess into the face of the panel of two inches to create a demonstrative shadow line. Additionally, recesses are utilized in the tilt-up panel faces throughout the building to create vertical relief from the flat plane. For example, the front elevation had four-inch recesses cast into the stair shaft panels while the main office panels had a two-and-a-half-inch projection at the top of the parapet capping the recess for the aluminum metal panels applied to the face of the panel below. Additionally, several panels were detailed as 30 inches thick to enable a sloped trapezoidal recess of roughly 22 inches back to the window or louver opening, further contributing to the architectural appeal of the facility. 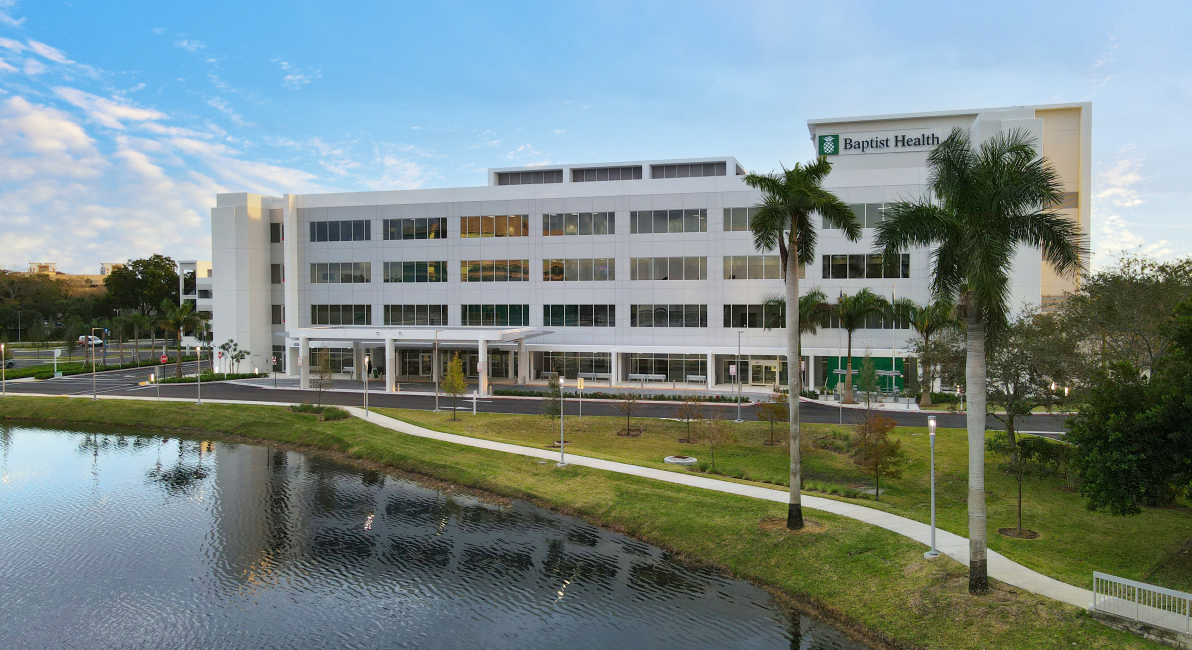