Our Lady of Lebanon Church

The church structure consisted of three different sections that had consist of varied architectural and structural forms. The church hall section and main church section lie at opposite ends, while the central section consists of offices, auxiliary and support spaces as well as mechanical and service spaces. The church hall consisted of 80 foot clear span roof joists bearing on 25 foot high tilt-up panels. The front of the church hall required heavy vertical reveals and window openings with a circular top. To provide a nice transition detail around the circular windows large pieces of HDPE plastic were machined to provide a chamfer at the required radii. Formliner was considered but through the mock-up process the joint along the round openings was an issue. The solution was a series of vertical plastic reveals, which worked well at the transition. The second phase of the tilt-up work involved the construction of 50 foot tall panels to form the base of the bell tower and a tilt-up elevator shaft. Bracing these panels was complicated due to the basement below and the height of the panels. The main church area was the most challenging part of the job due to the height of the end wall panels. Each end was split into two panels that were over 61 feet tall and around 130,000 pounds in weight with openings with half-circle diameters as large as 17 feet. These panels were analyzed for lifting stresses and strong backs and additional reinforcing bars were installed. The panel bracing was also a significant challenge due to the complicated geometry, such as sloped panels and variable panel heights. In total, six different brace types were utilized with lengths ranging from 17 ft to 52 ft for the project. The structural engineer was able to detail the tilt-up panels to resist the lateral design forces and was able to avoid bracing in the large open areas of the church. The next phase of the tilt-up work involved constructing and installing three spandrel panels that formed a low roof area along the side of the church. On the front of the building three tilt-up panels were built to form an exterior covered entrance. The front was a large peaked panel that was almost 58 ft wide and 49 ft in height and had three large half-circle openings. Further along the front of the building there were an additional five tilt-up panels erected that formed an open-air walkway or promenade, in which the absence of a roof diaphragm required special detailing. The final stage of the tilt-up work was to construct and erect four 24 foot tall panels. These four panels formed the upper section of the bell tower and were hoisted up and installed on an intermediate floor structure over 50 feet above the ground. The panels were temporarily braced until the roof structure was installed. When the roof structure of the bell tower was added, the elevation of the apex is nearly 100 ft above the ground elevation. 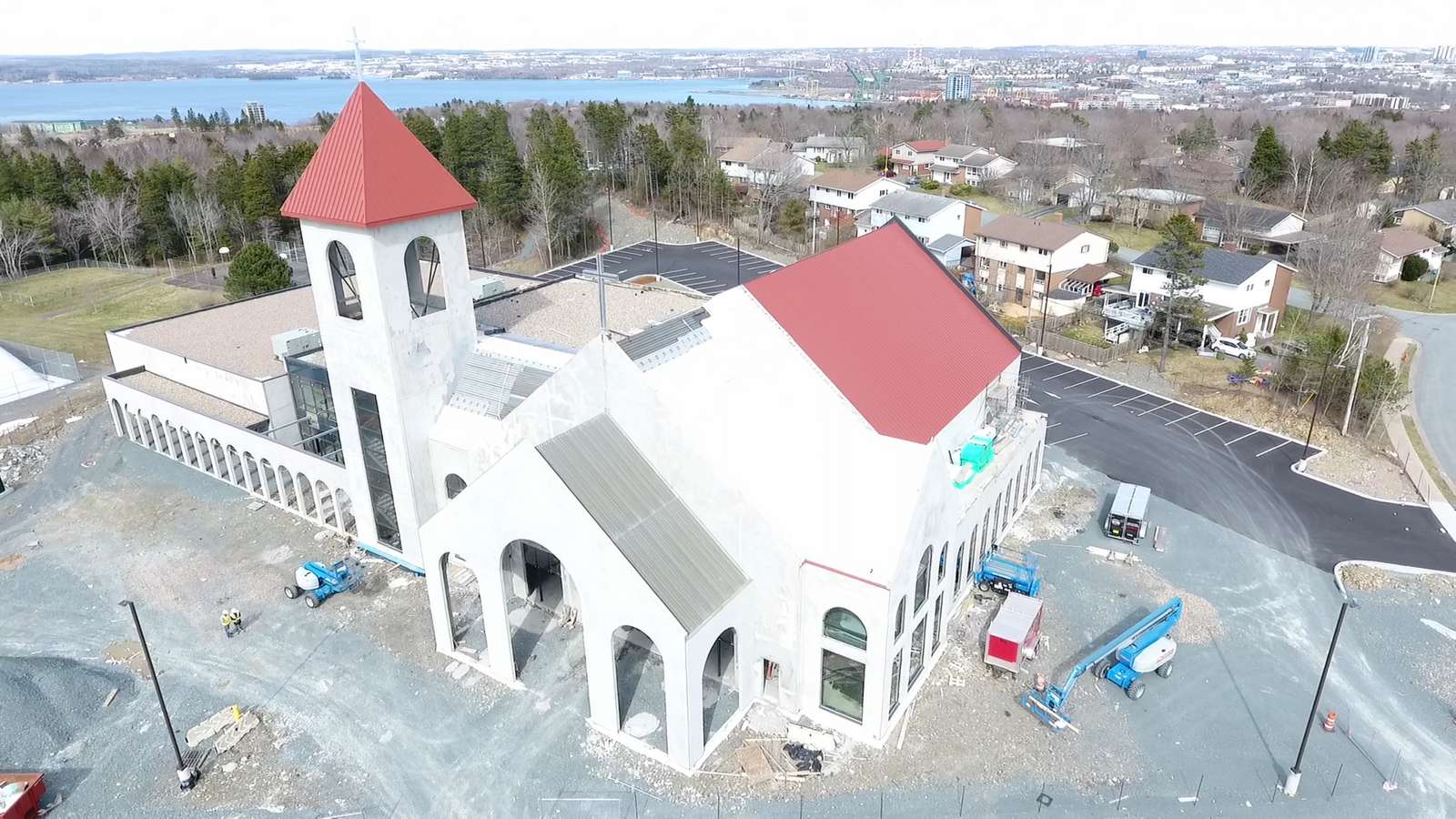