Tilt-up was chosen for the exterior panels of the Amazon Fulfillment Centre – YHM1 in Hamilton, Ontario. The record-setting achievements to provide a superior product for one of the world's leading online retailers were nothing short of extraordinary. The fulfilment centre represents one of the largest local investments in terms of square footage in Hamilton's history, located adjacent to John C. Munro Hamilton International Airport, and has confirmed that tilt-up construction in Ontario's cold winter months is possible. This project was originally designed as precast, but the timeline would have been impossible to achieve. The only other option was tilt-up construction, which the general contractor was fortunately familiar with. Amazon had never before considered using tilt-up in Ontario due to the cold winters even though tilt-up is frequently used in northern states in the USA. The general contractor approached Tilt Wall Ontario who reassured them that not only is tilt-up construction possible in Canadian winters, but Amazon's completion dates could still be met. Tilt Wall has a long history of curing concrete panels in cold winter months, so we have years of knowledge and experience involving methods to do this correctly. Tilt-up was chosen and immediately began its scope of work, with design and project planning. The timeline was tight, but construction start to finish was only 12 months, with panel construction starting in September 2021. The first panel was erected on December 5th and the last panel was erected on April 1st To avoid cold weather issues, ground heaters were used to cure the concrete and thaw any ice and snow. We also used innovative sensors in the concrete to monitor the temperature and ensure quality control. With the many challenges and the sheer scope of the project, Tilt Wall completed its scope on time and on budget. Not only that, but since the tilt-up panels were erected before the structural steel, the general contractor saved time and money on temporary hoarding and tarping. Using tilt-up also helped with the lateral support from the building and eliminated steel members. Upon its completion, this expansive, building set Canadian tilt-up records for 2,317,110 square feet of floor space, a building foot print of 855,150 square feet, as well as a Canadian tilt-up record for a gigantic 206,000-pound panel! Upon the completion of this milestone project, Amazon and the general contractor both voiced that they were thrilled with the result and better understood the ability of tilt-up construction to innovate the construction industry any time of year, even in Canada. This project was highly publicized in local and international media, which resulted in great enthusiasm for not only the project and its impact, but the innovative construction techniques used to exceed our client's expectations.

With the COVID-19 pandemic in full swing, onsite safety and personnel issues were challenges, but one of the largest factors was the time needed to obtain permits for crane lifts. Since the construction site is adjacent to an international airport and Nav Canada was backlogged with requests, there was a nine-week delay in receiving approval for lifting its panels. In total, there were 14 weeks of the year-long construction project that had lifts delayed due to delayed approvals or weather conditions. Fortunately, the tilt-up team pivoted and focused its energy on constructing panels while the process of obtaining approvals was ongoing. Before we lifted our first panel in September 2021, more than 70% of the panels were already built, only possible through the creation of temporary casting slabs. This Amazon fulfillment centre project is the largest tilt-up project in Canadian history, with one panel exceeding 200,000 pounds in weight. The multitude of large panels helped to reduce the walls' thermal breaks, a feat that would have been impossible with precast. 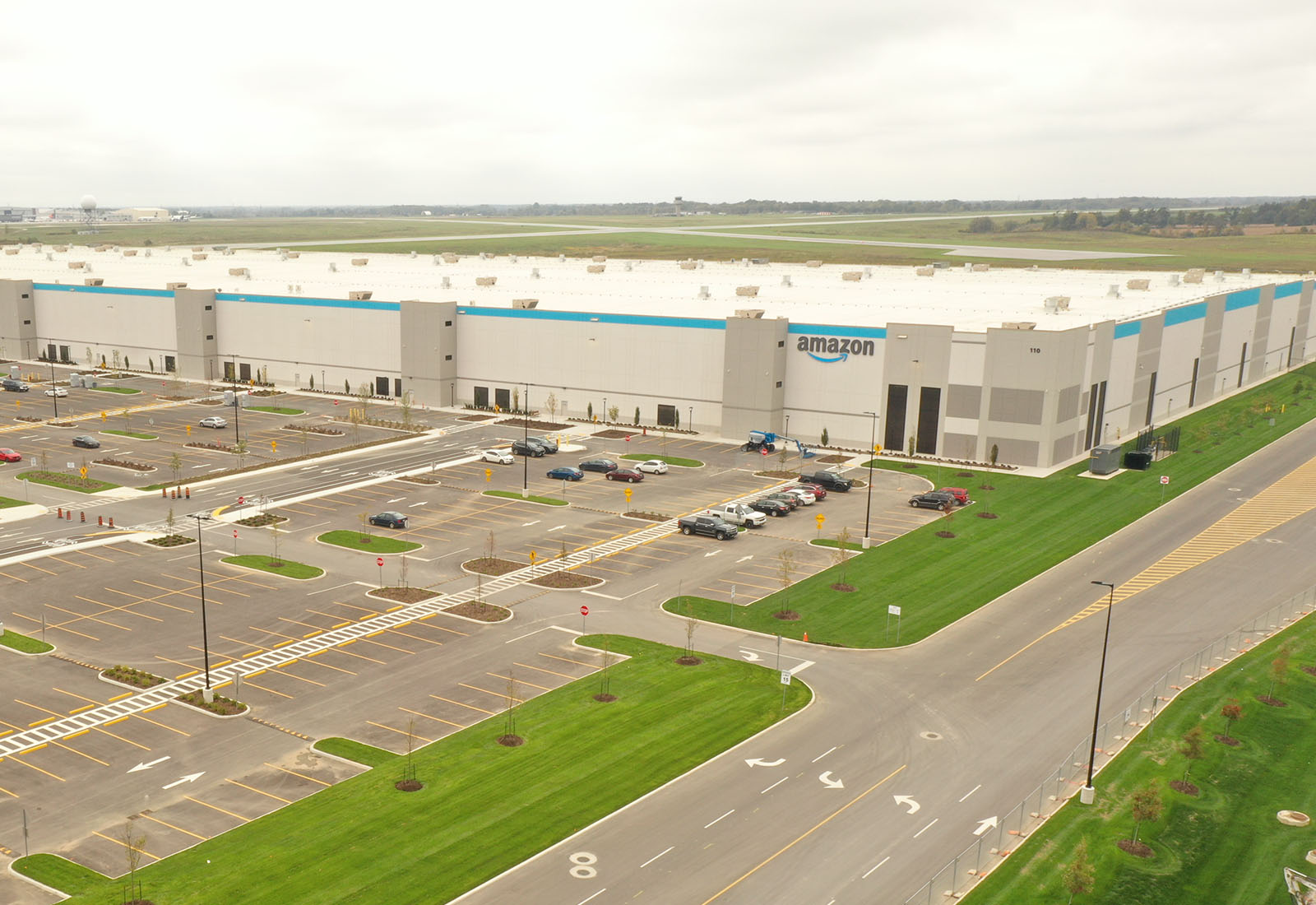