The $30M Donnelly College Academic Building broke ground in May 2019 and was completed in the Fall of 2020. The building features state-of-the-art learning environments, updated technology, centralized student support services, an academic resource center and a 60-seat chapel. Donnelly College, an urban catholic college in Kansas City, KS, is recognized as one of the most ethnically diverse colleges in the Midwest. The college planned the new three-story, 72,000 square foot academic building as Phase 3 of the Campus Master Plan. The building footprint is approximately 124’ x 170’. The exterior walls are load bearing, non-composite, insulated tilt up panels which also act as longitudinal shear walls. See www.donnelly.edu for construction updates. The project site for the academic building was extremely tight due to active roads on three sides and the existing academic building on the fourth side. The project had originally been planned for precast construction due to the site constraints. With less than 30 feet between the building footprint and the construction fence on all four sides, casting the insulated 55’ tall panels was a logistical challenge. To pour and erect all the panels for the building, casting took place in three sequences. Helical anchors were installed under the casting bed and marked for access after the lift. The entire building footprint was covered with a casting slab, and as many panels as would fit on the slab were poured. The crane lifted the panels which in turn created a path for the crane to travel inside the building footprint. The casting slab was repaired or recast between sequences of pours and lifts as the usable area for casting diminished with each sequence. The architectural design made each wall panel unique, requiring different formwork for each. Adding to the intricacies of the panels, the exterior surface of the panels was fully covered with custom form liner systems. Some of the panels required return legs with form liners wrapping up the sides of the form. The summer weather during construction was a challenge. Early morning pours could not be performed due to the proximity of the jobsite to the surrounding residential neighborhood. Hot weather concrete methods were used to reduce the heat of hydration and limit shrinkage cracks. Institutions of Higher Education were deemed essential for COVID-19, so construction continued through the pandemic. Construction crews made the first headlines in local Kansas City news for the “outbreak” of COVID on the site when seven workers tested positive in April 2020. The General Contractor made a few adjustments in their safety plans and the site was closed for a brief period. Most of the work at that point was interior finishes and glazing. The project was completed in time for students to arrive for Fall 2020 coursework. The existing eight-story academic building, a former hospital, was converted to classrooms in 1982 but despite renovations never lost its medical vibe. The building was scheduled for demolition shortly after the new building was completed in the fall of 2020. 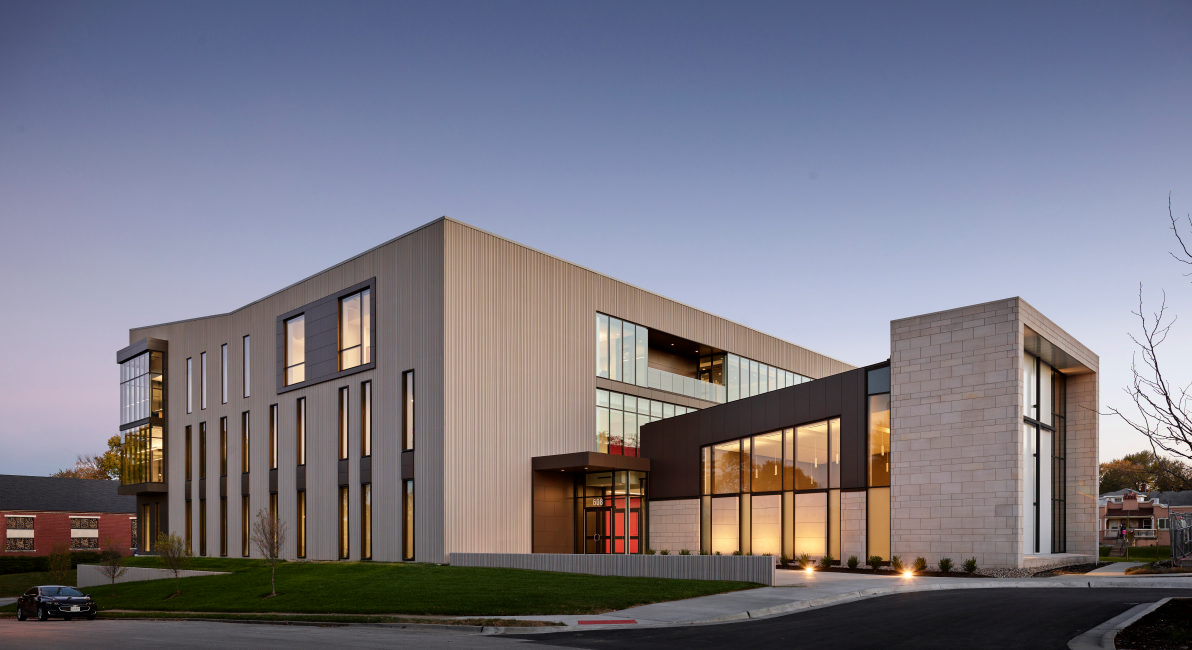