The five-story building required a sixth story on each of its three staircases for roof access. In total, approximately 13.4 million pounds of concrete were used to create the floor and wall slabs, resulting in 381 pieces. The building’s panels totaled 111,928 square feet, with 51,769 square feet for the walls and 60,159 square feet for the floors. And, the total height of the building, from the footing to the top of the walls, was 86’ 9”. Due to the size of the project, the contractor to adjust some elements of its normal process. A typical tilt wall build involves installing panels that are the full height of the entire structure. However, in this case, that would’ve meant pouring and erecting panels that were nearly 87’ tall. To overcome this, the team took a different approach. Wall panels were designed one floor height at a time, with the floor slabs also being designed as site cast panels. This unique tweak to their method allowed the team to execute the build in the safest and most efficient way possible, and their willingness to make these adjustments spoke to the company’s flexibility and tilt-up construction expertise. This project also needed some major lifting power to handle the building’s walls and slabs. The largest floor slab weighed in at 144,720 pounds and spanned 890.15 square feet. The largest wall, located on the fifth story, weighed in at 123,500 pounds and broke a company record for the widest wall installed at 60’ 10” wide. To handle the enormity of these panels and reaches of 160 feet, a Liebherr LG 1750 lattice boom with a maximum load capacity of 750 tons, was used making it the perfect fit for a project of this size. Additionally, the team used, a 350-ton mobile crane, to move panels close enough to the LG 1750 for picking them and a seamless installation. The Muskoka Bay Resort condominium project first got underway in May 2018, the building was originally designed as a cast-in-place concrete building. But due to the unique demands of the site and the pricing and timeline expectations of the Muskoka Bay Resort owners, tilt-up was eyed as a more viable solution. Overall, tilt-up construction is more cost-effective, energy-efficient and durable than cast-in-place concrete or other types of construction. It also provides unmatched architectural versatility and appeal, lending itself to a variety of purposes and creating buildings that are aesthetically stunning. With these factors in mind, tilt-up construction quickly became the frontrunner as Muskoka Bay Resort explored its options. Panel construction was underway by the first week of March 2019, and then, things moved fast. The foundation was complete by the end of April, and all underground and floor slabs were completed at the end of May. The team started erecting panels on June 3, with the last one installed by July 18. Though tilt-up construction was originally eyed as an alternative, it emerged as the superior choice. 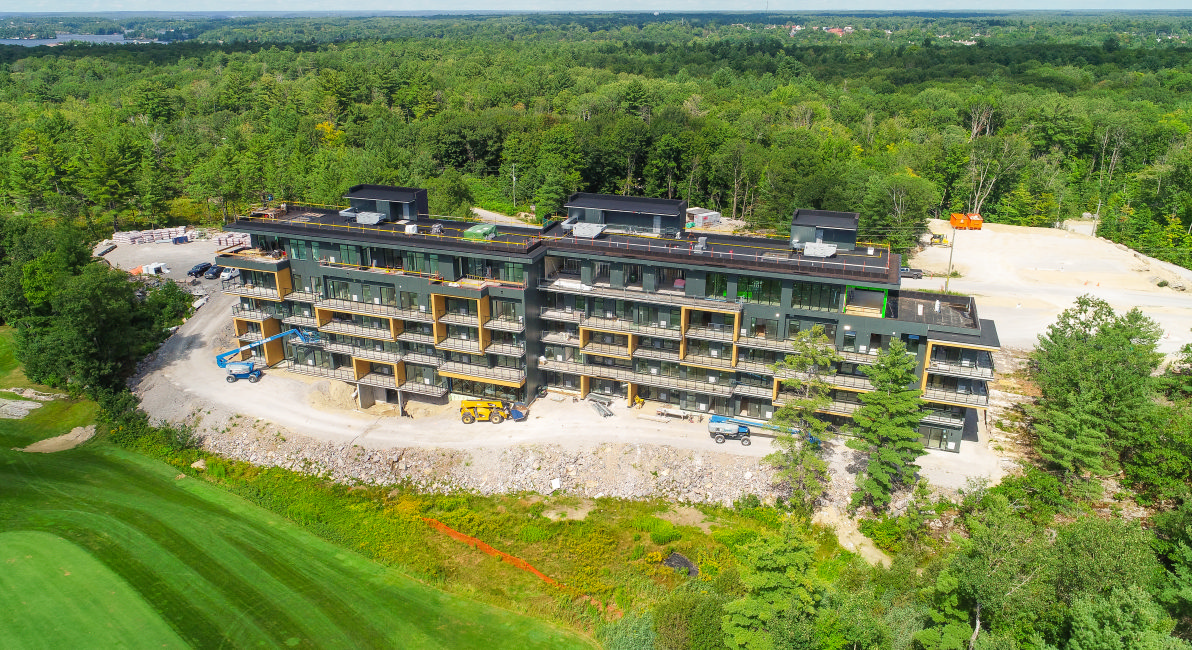