Bradford Preparatory School - Fitness & Fine Art Center In 2020, Bradford Preparatory School added a 30,750 sf Fitness & Fine Arts Center to their growing campus. This new Center included two separate gym spaces totaling nearly 16,000sf of space for basketball and volleyball courts. Lockers, training rooms, offices, and the main lobby were located on the first floor; with weight rooms, music rooms, and multi-purpose rooms on the Second floor. The Second floor layout also contained a wide spectator corridor to allow for views over the main gym. Tilt-Up was promoted to the school by the general contractor due to its speed, value and ability to deliver a high-quality lasting investment. Insulated sandwich panels were chosen at the gym areas to provide an architectural surface on the exterior and low maintenance durable interior surface. Tilt-Up demising walls were also used between the gym spaces and to carry the heavy 2nd floor loads between the gyms and accessory spaces. With an incredibly tight building site, planning and scheduling between the School, General Contractor, Shell Contractor, and the other trades was vital. Two sides of the building site were bound by a student drop-off loop that needed to remain open, the third side contained an athletic field, and the fourth contained a small existing parking lot that luckily was able to be used for access and some careful staging. Panels were stack casted on the building pad, and a temporary 9’ high ramp was built to allow the crane to crawl from the parking lot to the gym floor. Planning paid off and about 3 months after digging the first foundation, the Shell Contractor delivered this structure. The Fitness & Fine Arts Center incorporates many unique Tilt-Up panel details, most prominently is the 13’ wide Bradford Preparatory tree logo and lettering that was cast into the panels using CNC milled MDF. Different formliners were also used around the building along with wide accent reveals to mimic patterns used on the existing campus buildings. Recessed surrounds at the windows also created the look the School and Architect were after. Textured paint coats the Exterior and also the many exposed panels on the Interior as well. Due to site and schedule constraints, typical panel reinforcement lengths were ordered with the final fabrication done in the field. All panels are load bearing, even the insulated sandwich panels that support the clear span gym roofs. Retaining wall panels were added at the entry stairs that not only supported the stairs and floating entry slab but also was designed with blockouts to miss the existing stormwater pipes. Overall, Tilt-Up proved to be an excellent method for this project - The School was ecstatic to move into this new space, the GC was able to deliver on his promotion of Tilt-Up, and the Shell Contractor created another building that challenged and proved their unique abilities. 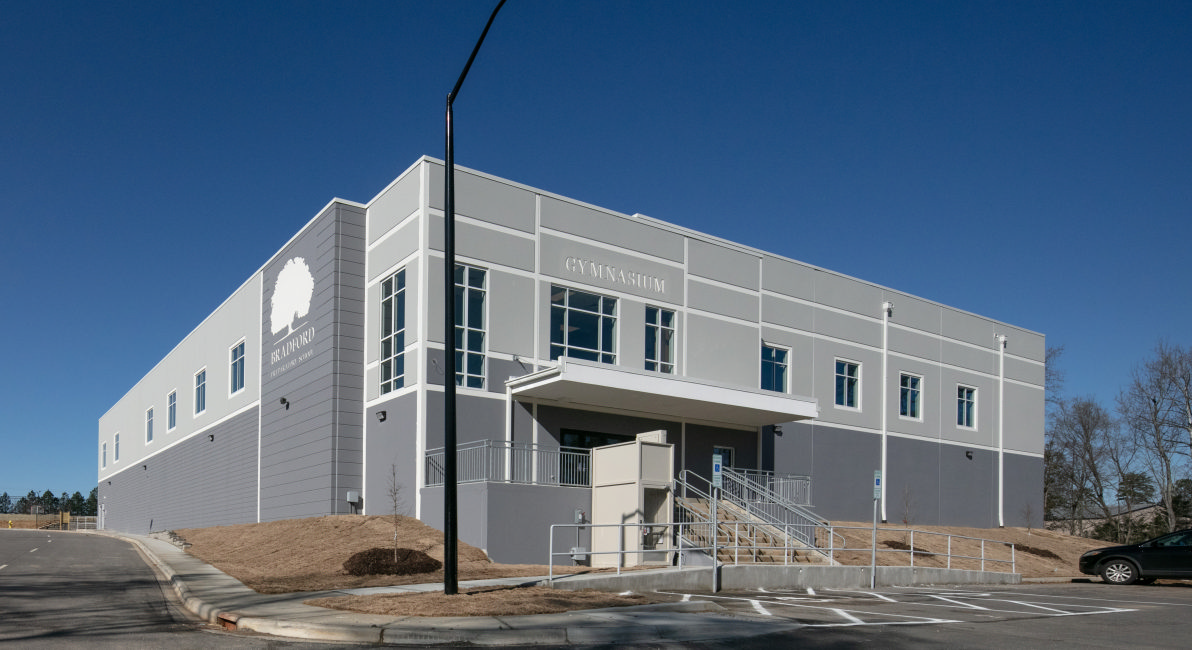