From the beginning of the project, the problem that surfaced by means of several user group discussions on intended needs and desires for the project was that the building should give equal identity to both the Business School and the Indigenous Scholars Institute by means of an exterior presence. Although simple in concept, the building also aesthetically wanted to appear to be of the same language and material; subsequently, creating different identities for such disparate user groups became the core challenge and opportunity for shaping a unified building that would formally become known as Cloud Song. The plan offered us the ability to organize and allocate space in a push/pull methodology that allowed for the Business School to have a physical connection and presence to the campus and the Indigenous Scholars Institute to have a visual connection to the adjacent east Red Mountain as well as a significant amount of outdoor space for events. Additionally, both the Business School and the Indigenous Scholars Institute have different material selections on the interior of the building to further create a subtle visual differentiation between the two programs.

Beyond the building acting as a space that is well-accepted by the campus and the community, the goal for this space is that it will educate students and visitors of the history of the Salt River Pima-Maricopa Indian Community (SRP-MIC). We incorporated many design elements after conversations and understanding with the SRP-MIC community into the building that are rooted in SRP-MIC traditions of building, harvesting, and performing. Our hope is to express this to anyone who visits the space and have them walk away with a greater understanding of the history of the land, its people, and the future of the SRP-MIC community.

The saguaro rib design element was a collaborative effort between the architect, contractor and subcontractor. Iterative in approach, the saguaro rib element took 8 mock ups before the design and construction method were completed and slated for construction. The method was nothing unfamiliar, but the material and burning were less precedential. After working through several mock-ups, we organized the saguaro into the formwork and placed sand between the ribs to not allow for the concrete to seep onto the face of the saguaro. After the tilt panels were cast, Architekton and Suntec Concrete worked together to define which saguaros would be concealed, removed, or burnt ultimately giving the final result that you see on site today. The belief for many people of the SRP-MIC community is that the living saguaro is seen not as a cactus, but rather an ancestor, a spirit, a symbol of life. By burning an unliving saguaro, one that has otherwise moved onto another stage of life, the saguaro (or spirit) is being released. The design of the casted saguaro ribs celebrates the releasing of spirits, while the imprint that is left from the removal serves as a reminder of the importance of this plant to the community. 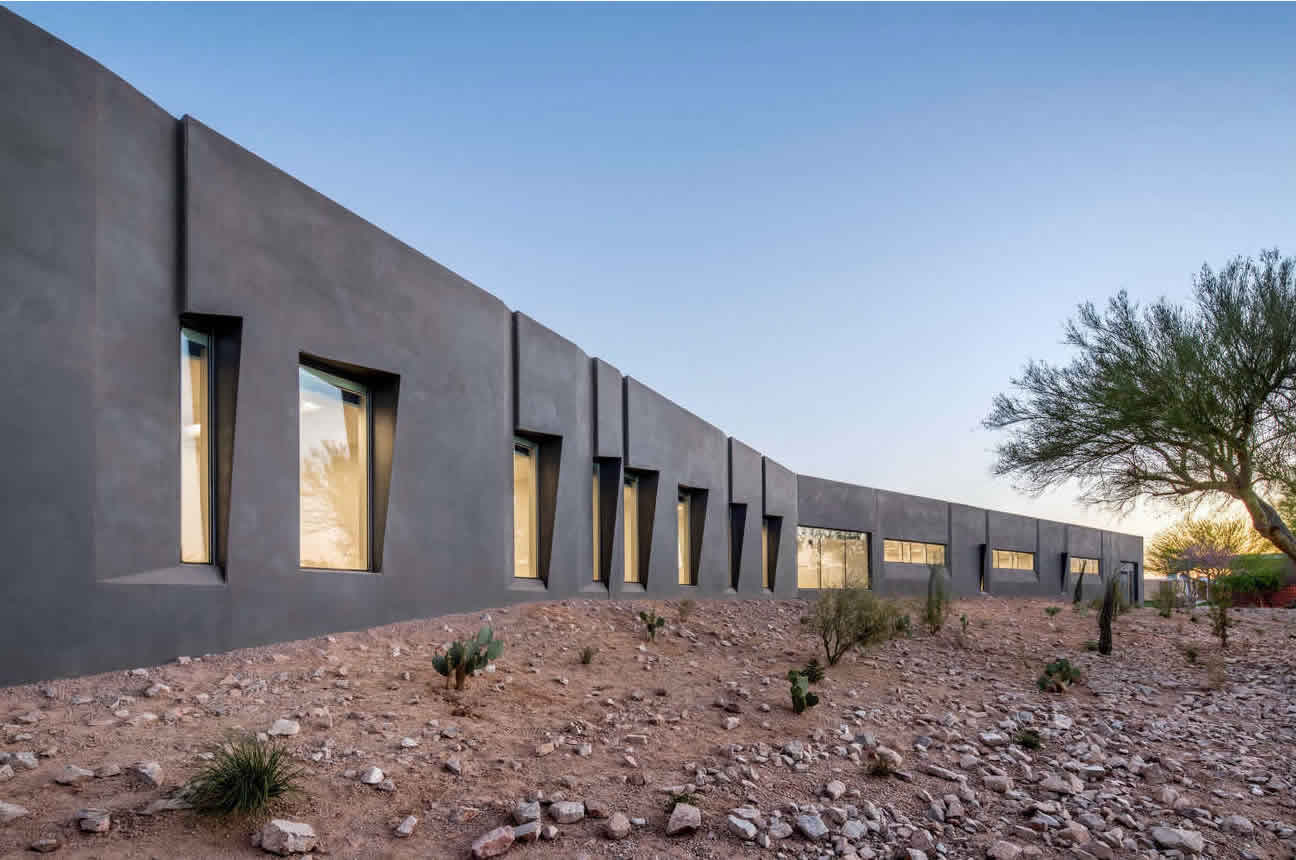