The Roy Innovation Center (RIC) is located at Hill Air Force Base in Utah. Designed for Northrop Grumman, it will serve as the headquarters for their nationwide team and support for the national Ground Based Strategic Deterrent (GBSD) program. During construction of this campus, Northrop Grumman and the State of Utah were awarded a $13.3 billion defense contract to build 400 new intercontinental ballistic missiles. This contract will help bolster and update the United States' aging ground defense system and will create a new fleet of arms to replace the Minuteman III arsenal which has been in service since 1970. Northrop Grumman's need for high security required unorthodox construction components and collaboration between Hill Air Force Base, architects, engineers, and construction teams. In designing each building on the campus, the goal was to reflect the principles and values of the tenant occupying them. With Northrop Grumman being an icon in America's rich history of aerospace innovation, the buildings were designed to incorporate classic aspects of the aviation industry. The buildings range from 156,000 to 303,000 square feet on a campus of 65 acres. Tilt-up concrete panels, each about 12 inches thick, allowed an expedited schedule while keeping the secure campus cost efficient. The buildings also incorporate buckling restrained braced frames, structural steel, and curtain wall elements. The combination of tilt-up concrete and buckling restrained braced frames allowed to capture the efficiencies of tilt-up concrete while also permitting flexibility in the architecture where desired. Rather than attempting to disguise with paint what could easily become an unforgiving building, a natural concrete finish was desired. The panelized nature of tilt-up construction enabled variation to be achieved by adding unconventional locations of control joints and board-framed sections. These visual aspects help tell a story of aircraft craftmanship. A gradient was achieved by tinting concrete to abstract the effect of the sun washing across an aerodynamic object's curved surfaces. Some of these exterior finishes and fine touches include IMAR panels, ordered from Spain, that mirror the rivets of WWII fighter jets. In a similar vein, the exposed trusses evident at the north entry portal nod to the feelings of awe that one has when entering a monumental aircraft hangar. The interiors are finished with class A office space and are fitted with the latest technologies for digitally accessed systems.

Being located on the Hill Air Force Base, the site of the project needed to be cleared of asbestos, explosives residue, steam lines and tanks, with an abundance of existing utilities needing relocation. This required a specialty demolition contractor to clear and properly prep the site to ensure safety. The increased security and classified nature of the client created interesting pressures on the construction and engineering teams while they were working on the project. The base perimeter at Hill Air Force Base (HAFB) also made logistics difficult for contractors, staff, and materials to pass security checks. To mitigate this, HAFB then relocated the base's fence perimeter to just outside the work site lines which was critical to the success of meeting deadlines. Each building on the campus was subject to a compressed schedule to meet the client's needs. Building one had an original schedule of 11 months and was delivered in just over nine months. Building two was slated for a 24-month schedule, but was turned over in 16 months at the client's request. Buildings 3 and 3A were also on a compressed schedule and were delivered two months prior to the delivery date. Unsurprisingly the COVID-19 Pandemic created unprecedented obstacles to overcome. Issues concerning illness, social distancing, and the slow-down of the supply chain created opportunities for problem solving. One example of supply chain issues is in situations calling for 12-gauge studs, materials of lesser gauge were used, doubling their spacing to ensure proper structural integrity.

The Roy Innovation Center Campus required an accelerated construction schedule in order to deliver four buildings in a short period of time. When investigating structural systems compatible with the fast-paced construction, tilt-up quickly became the frontrunning system. Located in an area of high seismicity along a nearby fault, the concrete tilt-up panels were utilized not only for the gravity support of the building, but also for the earthquake level forces and detailing. All 200 plus tilt-up panels on the campus were designed and detailed as special reinforced concrete shear walls, with nearly 300 diagonally reinforced coupling beams. The tilt-up panels were designed to limit the seismic drifts of the building to within code limits while providing sufficient entry points for natural light. Sufficient reinforcement in the tilt panel legs were designed to meet the amplified seismic forces required by code while also providing the necessary confinement required in areas of high seismicity. The use of tilt-up panels to resist both the gravity and lateral loads provided an economical and efficient use of time and resources, both of which were crucial to the success of the project.

Besides strengthening national security of the United States and improving the Ground Based Strategic Deterrent (GBSD) program, the Roy Innovation Center will also bring many new jobs to Utah. Projections indicate that 5,000 new jobs will be available in the Roy and Riverdale area. Of those 5,000 openings, 2,500 will be high-skill, high-paying positions. This increase in employment will also bring increased tax revenues to the surrounding communities. Each year Northrop Grumman plans to add 1,000 employees locally and are presently hiring around 100 employees month-over-month. 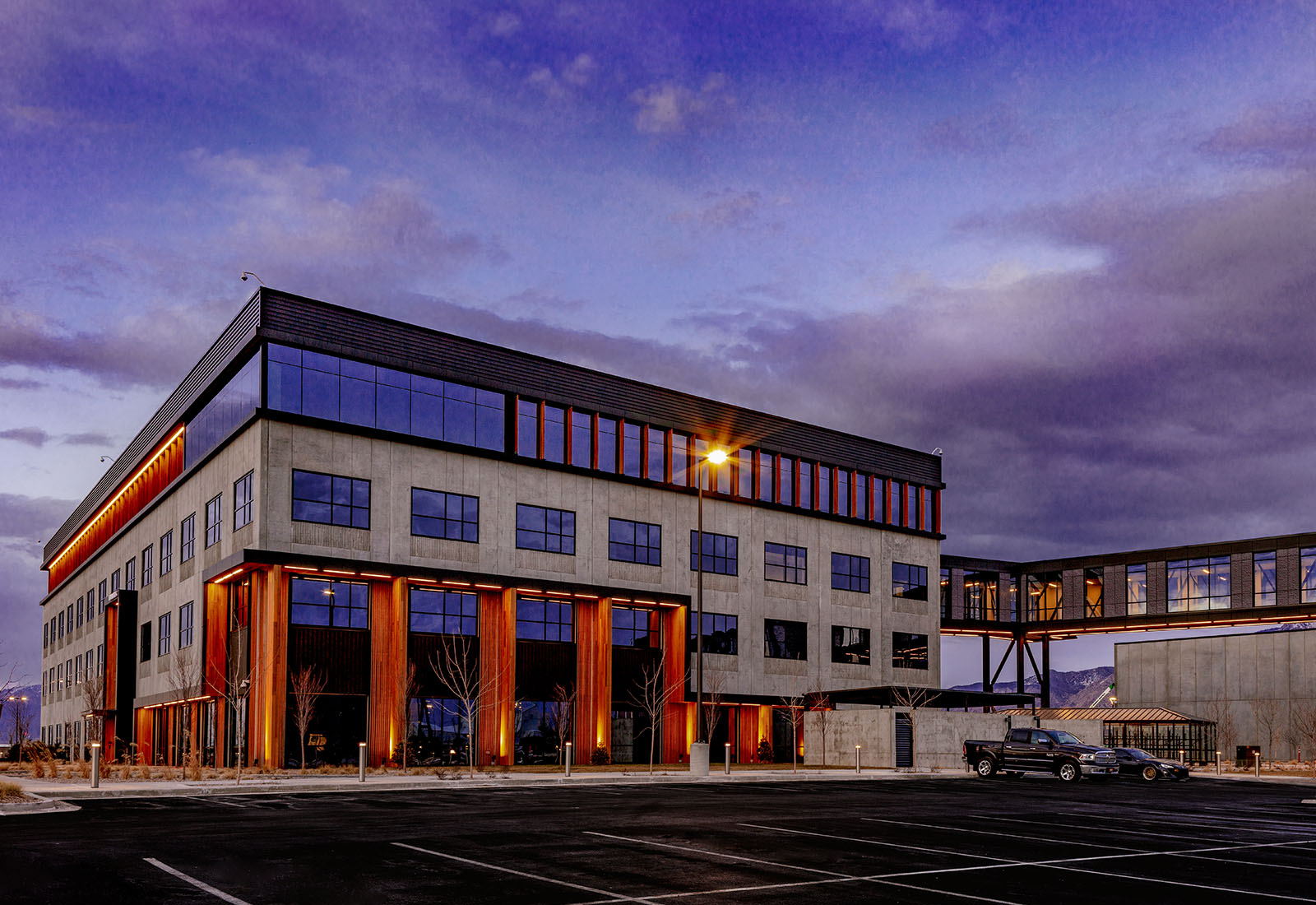