In 2019, the Owner was in a multi-market search for an existing facility that could be repurposed into a fully integrated administration, lab, manufacturing, packaging and distribution facility to support two diabetes drugs. After deciding on RTP due to its proximity to Tier-1 research facilities and accessibility to work force availability, the search was narrowed to existing buildings on the Parmer RTP campus. Driven by speed-to-market demands and tight budget requirements of their new facility, retrofitting the existing assets offered several hurdles and risks to the project that put its intended success in jeopardy. In a matter of time the team came up with an out-of-the-box idea that could de-risk the Owner's investment and lay the groundwork for a new greenfield development making use of 110 acres of virgin land on the campus. The new proposal made use of our vast greenfield development knowledge, life science experience, and design-build expertise to offer a completely new campus that would be purpose-built to meet the Owner's needs in less time and less investment costs than repurposing the existing facilities they were originally considering. The result was a new $474 million development spanning over 750,000 SF across 11 integrated buildings. Features of the development include a 240,000 SF three-story parenteral manufacturing facility, a 200,000 SF two-story medical device and packaging facility, a 105,000 SF two-story administration and laboratory building, a 95,000 SF refrigerated Automated Storage and Retrieval Systems (ASRS) warehouse, and a fully functioning central utility plant. This project is a complex of buildings that are interconnected by a common corridor, which is 22 feet by 750 feet. There are six buildings adjoining the corridor from both the north and south, totaling a 324,847 SF building footprint with 688,392 SF of floor area. The project is a multi-level pharmaceutical production facility with floor level changes and pass-throughs between buildings. The Owner was committed to building a facility that was state-of-the-art and would carry their needs well into the future. Structurally composite insulated panels (267,520 SF), double walls for FM Global standards, and panels designed and constructed for future repicking were used to expand the two largest buildings. The integration of the design elements was achievable due to the design-build process utilized on the project; not withstanding the complex concrete elements, there were extensive MEP systems that were constantly being altered, and therefore pushed the limits of design. The project kicked off in January 2020 and broke ground in April 2020 in the heart of the pandemic. The team was able to turnover the first building 11 months later, and the remaining facilities within the following seven months. For those unfamiliar with greenfield development, the result was astounding. This approach allowed the Owner to cut their time-to-production from six years to three years, allowing them to service their patients in faster time and capitalize on three years of earlier than anticipated revenue for nearly 30% less cost than the traditional means that the Owner had used in the past.

The three largest challenges faced were schedule, site, and specification; these were encountered through multiple facets of the project. The shell schedule was originally eight months but grew to 14 months. Ultimately, we were able to maintain the overall project timeline by coordinating changes in priority of the buildings and around other trades. One of the largest hurdles was building three which contained an 86,567 SF, 22-foot deep basement, and a second-floor mezzanine. Due to soil conditions which required blasting as well as drainage issues due to the site topography, this scope was delayed four months. The team delayed the basement slab pour and erected the structural steel ahead of the panels. When rearranging the sequencing, we were met with challenges to find casting area. By the end of the project over 144,440 SF of casting bed was created with over half of the square footage used at least twice. Beyond the basement issues, the overall site created many challenges. Coordination with other trades in the limited space became of huge concern and coordination in the second two thirds of the project. Access to the site was limited by a one-loop road which would become impassable after rain events. The topography added to this as the elevation changes throughout the complex made crane access and mobility difficult, as much more crane mobility was needed to erect around multiple buildings.

This project featured composite panels with an integral layer of insulation. Openings for mechanical or electrical utility entries were common across most of the panels to accommodate a large amount of building utility services required for the plant operation. These openings were closely coordinated with offsite fabricated pipe racks to ensure that openings landed where utility stub-ins were pre-fabricated. The Administration Building transition to the common corridor posed several challenges. The basement level foundations and retaining walls encompassed the corridor transition as well as one of the adjoining buildings. The corridor panels were placed on the retaining walls and stacked on retaining wall panels in other areas. The basement side of the wall at the corridor panels made it difficult to erect, brace and connect the panels. Due to the complex erection sequence and close quarters of the panels, there were a number of locations that required highly coordinated tilt picks including the common corridor (spline) that saw two parallel walls spaced 22 feet apart which required setting the first panel on the non-basement wall, bracing to a deadman footing, then placing the second panel on the basement cast-in-place wall and bracing that panel back to the first panel that was set. Steel erection followed directly behind to ensure that there was a secondary connection for safety.

When fully operational, the plant is expected to generate 462 jobs over the next three to five years. Eli Lilly will hire candidates in various roles, including scientists, manufacturing operations, quality professionals and engineers. Initial recruitment started in 2020, with the majority of the hiring anticipated for around 2023. Employees' average annual wage will be around $73,000, while the starting wages for entry-level jobs will be around $49,000. Eli Lilly secured a Job Development Investment Grant (JDIG) from North Carolina for the development of the facility. Approved by the state's Economic Investment Committee in January 2020, the 12-year grant will see the company receive a reimbursement of up to $8.7 million, subject to the fulfillment of agreed investment and job creation targets. During the grant period, the facility is expected to add $4.1 billion to the state's economy. The speed and means at which this facility was developed has already had a significant impact in the way new biopharmaceutical facilities will be approached in the Raleigh-Durham region and throughout the country moving forward. The design-build model used for this project carved an entire year out of the development process. This process made an impact on the Raleigh-Durham community and has shown that the design-build method can be beneficial for other life sciences and pharmaceutical companies that need to start producing products as quickly as possible. 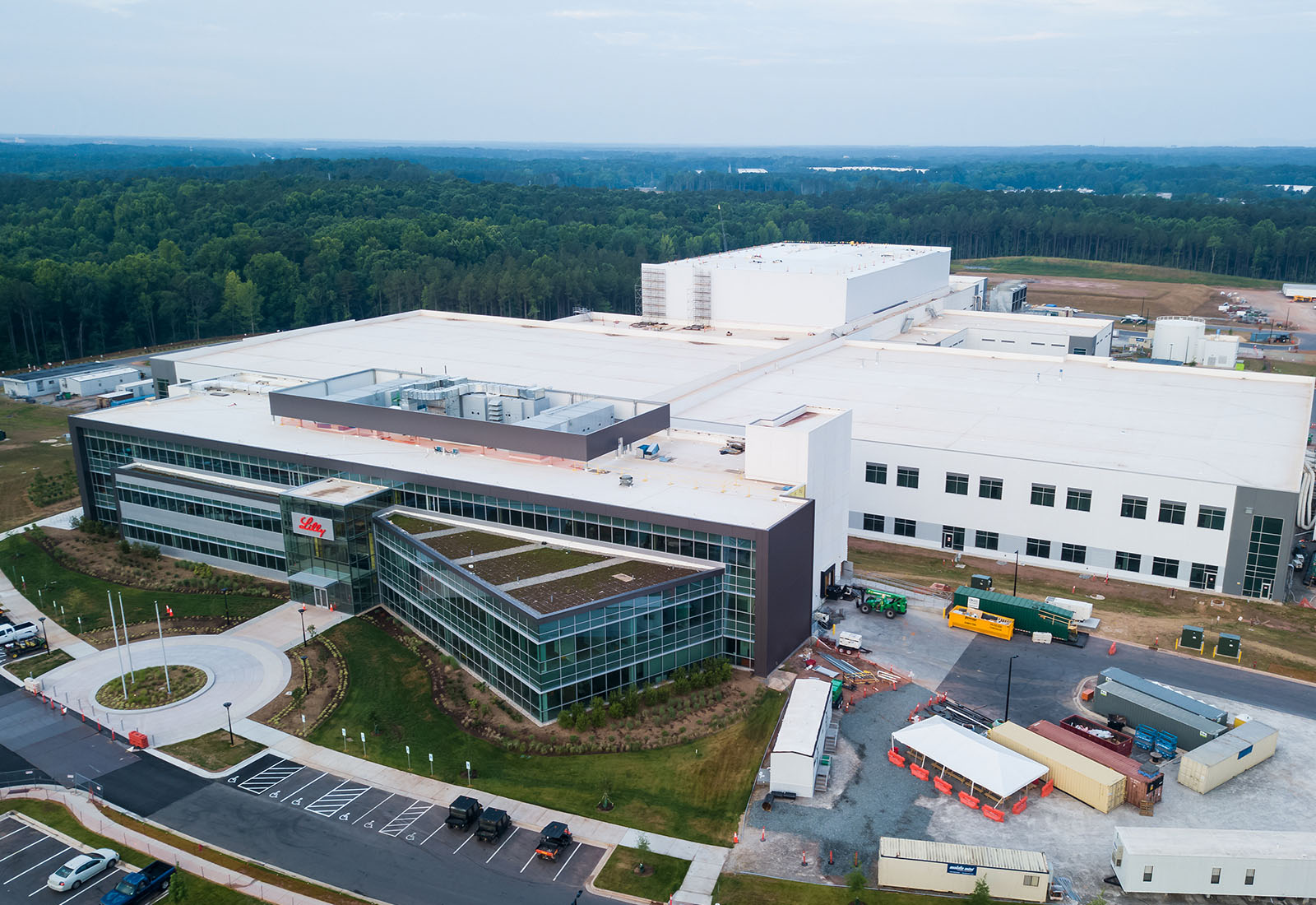