As a school that has a tradition of inspiring, supporting, and collaborating with students, it was only fitting that students at Alta High School should have a state-of-the-art facility with significant amenities. These reasons among other needs such as gathering spaces, teacher collaboration areas, updated athletic and performing arts centers, and improved security, pushed the high School into its currently ongoing extensive expansion and renovation project. However, this project came at a steep cost to the Canyons School District until Hughes General Contractors’ innovation and vast experience saved the district $500,000. With the performing arts center at the forefront of the expansion, the new 62,431-sq-ft, freestanding arts building came with a challenge. The architect had originally designed the 75-foot tall building with conventional CMU walls. This presented a challenge to find masonry subcontractors who are both equipped to lay walls this tall and willing to accept the challenge. Hughes discussions with potential masons resulted in a quick understanding that masonry would not be feasible in terms of cost/schedule nor would it meet the safety goals of the team. After Hughes General Contractors re-evaluated the structural systems for the project, they suggested using tilt-up concrete panels that could be cast on-site for the high structural load-bearing walls. Hughes’ suggestion saved more than $500,000. Hughes would cast 65 separate panels, the largest standing at 75 ft. 8 in. tall and the heaviest weighing just over 130,807 pounds. Hughes used BIM to determine panel pick placement, lift angles, brace movement (and in many cases “weaving” braces around each other in the tight space), sequencing, and timing. They also used BIM as a detailed road map to ensure crew safety and efficient tilting. The immense panels now house the auditorium’s stage and include exposed tilt-up interior walls that are the tallest in the state. The Performing Arts Center features 1,410 seats and a woven bird’s-nest pattern. Hughes's award-winning, vast experience, and innovative resources kept the architect's unique design approach while saving the school district thousands of dollars and exceeding expectations. Possibly of even greater impact, it introduced one of Utah’s largest architectural firms and one of Utah’s largest school districts to the art of tilt-up. The district subsequently awarded the same architect and contractor team their new junior high to repeat the tilt-up success. 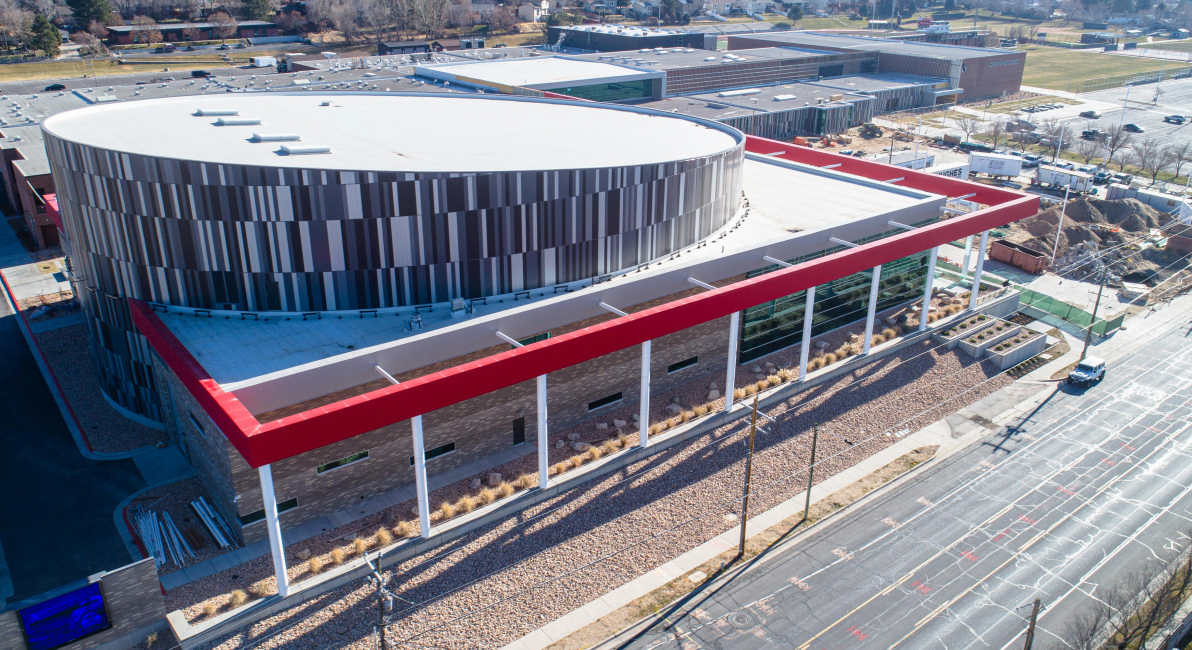