What is Value Office™ and Why?

Value Office is a term we’ve coined for the conversion of a typical conventionally constructed (that is steel or concrete framed perimeter column non-load-bearing wall construction) market office building to tilt-up technology. The original task, one of commodifying the building method through a building type, was an uphill struggle at first. We had to prove to commercial developers that utilization of a low-cost construction technology to build an investment grade office building could compete with the definition of Class A in the marketplace. The aesthetic flexibility of tilt-up combined with its ability to improve upon the characteristics of typical offices ultimately won a niche for Value Office in numerous national market regions. It improved upon the conventional product as it has no perimeter columns making it more efficient to plan, due to wall strength accepts any exterior cladding material and offers column free all glazed corners to name a few of its appealing attributes to developers. Most significantly, and importantly when combined with the above advantages, it averages $7-$10 per square foot less expensive for the exact project built conventionally in most suburban markets. This is no subtlety; it represents a grass roots insurgency on the part of low-cost technology fueled by historic economic forces. It occurs in a space that many architects have occupied – developer work, investment grade commodity architecture – but as contractors and developers have been more open-minded regarding adaptations like tilt-up into “high-end product” it inadvertently threatens to leave that area of architectural practice behind if ignored. Our effort has been to engage the economic metrics head on in order to control the possibility of an aesthetic potential in this building type that makes up so much of the everyday suburban landscape. 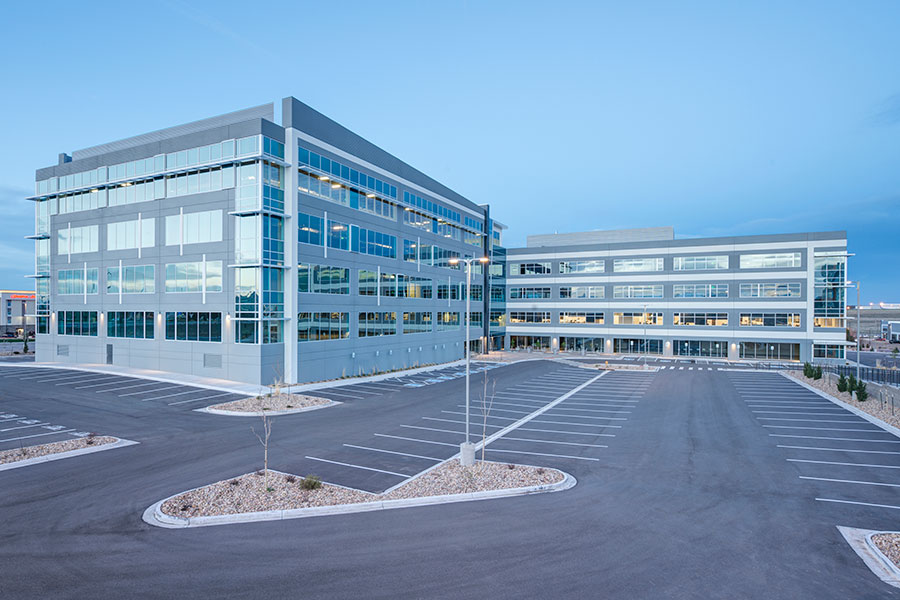 INOVA II is strategically situated immediately east of the intersection of I-25 and East Dry Creek Road. This building is the second in a seven-building planned business park that will offer over 850,000 square feet of inventive mixed-use property. Current plans accommodate up to five additional buildings, with at least three multistory office, one industrial /flex asset with 24 foot clear heights, as well as over 650,000 square feet of single- and multi tenant occupancy, with flexible floor plates to accommodate campus users from 30,000 to 200,000 square feet. Phase two is the second five-story tilt-up office building constructed in the Denver market. The building will feature state-of-the-art construction, LEED Silver certification, column-free flexible floor plates and lease rates under $20 a square foot, triple net. Additional amenities include country club bathroom design, bike storage, showers, lockers, and a food truck court.

The overall sense of presence the building conveys is well scaled and balanced in spite of the market driven floorplate sizes which could be, handled differently, overwhelming.

The building has accommodated the need to be general without succumbing to being neutral.